admin
5 Trends From the 90s Making a Comeback►►
More Celebrity News ►►
After five years, Pretty Little Liars finally revealed the identity of “A.” But, while the reveal was supposed to be huge celebration for fans, they’re actually pretty pissed about the whole thing.
Last night’s PLL midseason finale finally revealed some major secrets. SPOILER ALERT for those of you who didn’t watch, but those of you that did watch discovered that “A” is….. CeCe Drake!
After the reveal everyone was shocked and actually pretty angry, and they took to Twitter to express how they felt about the midseason finale. Let’s take a look at some of the angry tweets people sent out:
@ghostloz wrote QUOTE k but srsly tho im so pissed i want a refund of the past 5 years #FAceToFace END QUOTE
@Tasha_Baybee07 said QUOTE 6 seasons and 5yrs later for nothing. #PLL #FAceToFace END QUOTE
@beeyotchWP tweeted QUOTE Knowing who A is doesn't feel as satisfying as I thought it would #FAceToFace END QUOTE
@perks0fpitts posted QUOTE when i die i want the producers of pll to lower me into my grave so they can let me down one last time #FAceToFace END QUOTE
And @Tamera_barbeary tweeted QUOTE fans came up with better story lines and ending than the actual writers did for pll #facetoface END QUOTE
Clearly, Twitter had a very strong reaction to this episode, but what did you think about the reveal? Let us know your thoughts in the comments below and don’t forget to subscribe, plus click right over here to see 5 ‘90s trends that are making a comeback. Thanks for watching Clevver News, I’m Danielle Robay and I’ll see you next time.
For More Clevver Visit:
Website:
Like us on Facebook:
Follow us on Twitter:
Keep up with us on Instagram:
Add us to your circles on Google+:
Tweet Me: 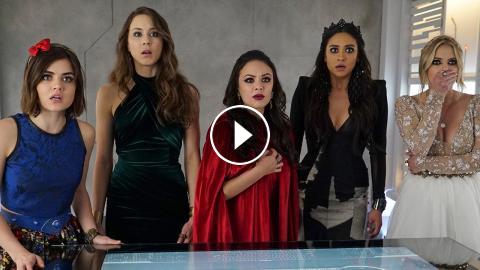 5 Trends From the 90s Making a Comeback►► More Celebrity News ►► After five years, Pretty Little Liars finally revealed the identity of “A.” But, whil...