Zayn Fans OUTRAGED Over 2017 Grammy Snub - Why He Didn't Qualify

admin
More Celebrity News ►►
As one Twitter user perfectly put it, “Today is Grammy nomination day. For Zayn Malik fans, today… is Tuesday.”
It’s been quite the successful year for newcomer solo artist Zayn Malik following his departure from One Direction, but aside from topping the charts with his debut single “Pillow Talk” and releasing his critically acclaimed album Mind of Mine, there’s one honor he won’t be receiving this year.
The 2017 Grammy nominations were announced just this morning, and Zayn was noticeably absent from all categories from Song of the Year to Best New Artist. Many Zayn fans took to social media to express their disappointment, with many tweeting things like QUOTE, “Zayn is one of the most underrated artists rn!! If anyone didn't believe it till now, then Grammy's have proved it!!”
Some fans also expressed their opinions as to why he wasn’t nominated, following his multiple cancelled appearances and lack of promotion, writing, “I have no doubt Zayn's second album will be nominated for a Grammy. But our boy needs to step up with the promotion tho it's not enough”.
But the real reason as to why Zayn wasn’t nominated for Best New Artist was explained by senior Vice President of awards at the Recording Academy, Bill Freimuth back in October that going by the Recording Academy’s rules, Zayn doesn’t count as a ‘new artist’ due to his successful four-album run with 1D beginning in 2012.
He stated QUOTE, “This was actually pretty clear cut given the international success of One Direction. It's been a few years since Zayn Malik came to prominence as a member of that group, making him ineligible for the best new artist category this year.”
Makes sense when you think about it, but that doesn’t excuse the fact that Zayn wasn’t nominated in any other category. Safe to say Zayn fans alike will be eagerly waiting for a nom come 2018, but for right now, I want to know all your thoughts on the singer’s Grammy snub, so get the conversation going right down here in the comments, and don’t forget to mark those calendars for the 2017 Grammys airing on February 12. After that, you can click right over here to check out the worst gift guide EVER imaginable on a new Beauty Break. Thanks for hanging out with me here on Clevver’s award show coverage, I’m your host Tiffany Taylor and I’ll see you next time!
For More Clevver Visit:
Website:
Like us on Facebook:
Follow us on Twitter:
Keep up with us on Instagram:
Add us to your circles on Google+:
Tweet Me:

Zayn Fans OUTRAGED Over 2017 Grammy Snub - Why He Didn't Qualify 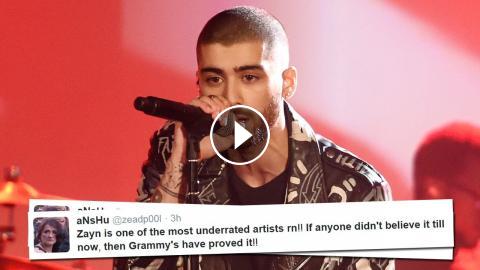 More Celebrity News ►► As one Twitter user perfectly put it, “Today is Grammy nomination day. For Zayn Malik fans, today… is Tuesday.”It’s been quite ...